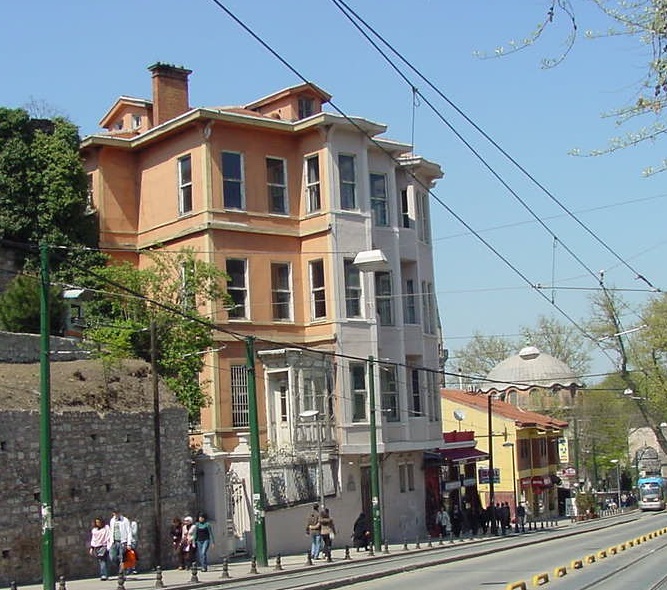 Abud Efendi Mansion, owned by Yücel Cultural Foundation covers a total area of 3,243 square meters including its garden and annexes.

The structure, which was constructed from wood in the late 1800's achieved its current appearance by mortaring and painting its exterior walls during the 1930's.

There is a magnificient public fountain, having brocatelles patterns and made of coloured marble at the entrance of the structure which can be considered a unique example of the era.

Interior of the structure which was built in the seraglio order form, bears typical Ottoman architectural character with a two-way stair system.

Interior ornamentation of the structure which is as stunning as its architecture is comparable to the best examples of the period.

The building has one of the most beautiful examples of stalactite ceilings with landscape pictures which has survived until today since the 19th century. It was registered by High Board of Monuments in 1983 as a second-order historical monument that should be preserved.

It is located in historical Eminönü district, at a distance of 70 meters from Hagia Sophia and adjacent to Basilica Cistern, the region between Gülhane and Sultanahmet neighborhoods, contiguous to Alemdar street (Streetcar track which is the main transportation route in the district) and Salkım Söğüt and Zeynep Sultan streets in the rear.

The building, consisting of 4 main floors and 1 penthouse is connected to the adjoining Turkish bath building from the first floor. Abud Efendi, the owner who was a nobleman originally from Damascus was known to have hosted his guests in this building which is close to Topkapı Palace. Three spouts for drinking water were connected to the mansion during that era.

In 1939, Alemdar Cinema was built next to the mansion, the first of its kind where women and men could watch movies together. It was donated to our foundation in 1972 after YCF was was established in 1969. An indoor sports hall was annexed to the backyard in 1948.

The building was used as Yucel Language Center where accounting, language and typewriting courses were given. It also hosted Sisterhood Club and Youth Club which were some of the social and cultural activities established by the foundation.

Relievo, restitution and restoration projects have been approved allowing multi-functional use by the Cultural Assets Preservation Office.

Electricity, statics and mechanical projects have been completed. Restoration expenses and estimated cost has been calculated. Restoration will be done by our Foundation.

YCF is currently awaiting entrepreneurs who are interested in administration and management of the facilities.

Yucel Culture Foundation’s Sports Center is Turkey's first sports hall opened since the Republic's early years in the service of all sports fans.

Basketball teams of important sports clubs such as Fenerbahçe, Galatasaray and Beşiktaş have used our sports hall for years.

Our weightlifting hall is closed since 2003.

People, institutions and schools who want to use the place can contact us by sending an e-mail to info@yucelkulturvakfi.org.